Just when most traditional companies are getting used to the idea of doing business digitally, a new wave of technology is coming that will put even more pressure on them to adapt as quickly as they can: what’s been called the Fourth Industrial Revolution.

No wonder IDC is forecasting an increase of 18% in digital transformation spending this year, as businesses race to upgrade and modernize their infrastructure and systems. But most businesses remain “digitally distraught”, as IDC puts it1. New ways of connecting with customers means new ways of doing business: hard to pull off if the C-suite can’t see past the next earnings report. 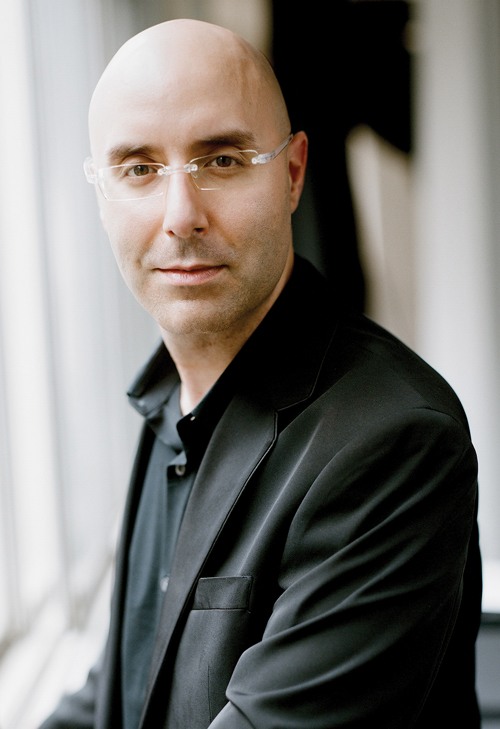 Since the number one goal of digital transformation is almost always to improve the customer experience, marketing should be leading the way. Yet, according to Forrester Research, that job is usually handed to the chief information officer (CIO), who’s more likely to be thinking digital-first, not customer-first2. Which is why efforts at digital transformation generally flame out, doused by a lack of urgency and a lukewarm commitment to change.

Preparing for convulsive change is crucial if businesses want to avoid disruption. Which is exactly what Mitch Joel has been urging businesses to do for almost his entire career, making a name for himself as a digital expert specializing in “decoding the future”, as he puts it.

Mitch built his reputation as a trailblazer in the early days of the digital revolution, dating back to the start-up of his agency Twist Image in 2002. Today he writes a popular blog called Six Pixels of Separation which he started 16 years ago and produces a weekly podcast by that same name. He’s also written a couple of best-selling books, the second of which, Ctrl Alt Delete, was about “the evolution and reboot of business”.

Q: You’ve had interesting arc to your career, starting out as a music journalist and publisher. Did your experience in the music business give you an appreciation for the risks of ignoring digital disruption?

A: At the time, the general attitude of the music business toward digital was “It’s a fad”. But when Napster happened the attitudes became corrosive. Even in those early days, every industry was facing disruption. It was just a question of when.

Q: Are you seeing many companies embracing transformation as a result of digital disruption?

A: I can tell you that I don’t ever stand up in front of an audience and get off stage and feel amazed at how unaware they are of the disruption. If anything, it’s more a question of how fast they’re able to move. Do they want to lead? Do they want to fast-follow? Do they want to wait for the industry to change?

Q: How should they answer that question?

Q: In our business, agency services, what’s the answer?

A: I left the business in 2018. So, I’m really looking at it more like anyone else reading the advertising and marketing trade media.

Clients are bringing a lot of stuff in-house and they’re building very strong teams. And now you have the big consultants coming in, like Accenture and Deloitte, that are speaking to the C-suite. Meanwhile the holding companies are all struggling: “How do we consolidate? How do we optimize?” These are big $30 billion public companies that need to explain to the marketplace how they’re going to react to the consultants and in-house teams.

We’ve gone from three network TV stations, where if you weren’t on at prime time on a Thursday it was very hard for you to get traction in the marketplace, to today where you have this digital duopoly of Facebook and Google. And now you have Amazon entering the picture, which is going to push brands toward collecting their own first-party data, and that’s a trend that’s not going to go away.

Will the digital ad bubble burst?

Q: Given what we’ve seen over the last few years—ad fraud, brand safety concerns, the ascendancy of ad blocking, the lack of supply-side transparency, fractional click-through rates—is the digital advertising bubble about to burst?

A: Advertising is a very, very big business. You’re talking over $1 trillion—half of that in the U.S. Advertising is what ultimately pushes sales for every company, no matter what size they are.

Is digital advertising a problem? Of course, it’s a problem. It’s a problem because the web was never meant to be a media channel. What happened is we cobbled together technologies with chicken wire, duct tape and paper clips.

That isn’t the fault of the publishers; I think it’s a collective problem. It wouldn’t be very hard for publishers and media companies to choose the exact sites and types of pages they want to be on. But they don’t do that. They’re just using programmatic to place ads. On the platform side, is Facebook completely absolved of responsibility? No. When it comes out and say things like, “Thirty percent of your videos may not have been viewed,” that’s a problem.

A: Yeah. I’ve seen those arguments from him and from many other brands. But I felt that was a cop-out. Brands love throwing everybody else under the bus. I just didn’t agree with that comment.

I think that brands have a responsibility to know where they’re putting their ads, and if they feel like it’s not the right place, they have every right to pull it. Why did they buy it? Because it was cheap, fast and easy to do. All they were looking for is eyeballs and reach. That’s just old school thinking.

Q: Let’s look at this from the consumer viewpoint. People today feel they’re bombarded by ads. They feel creeped out by retargeting. They’re concerned about data surveillance and unauthorized use of their personal data. The web is not a good experience today for the majority of people, at least that’s what the public surveys suggest. Even Tim Berners-Lee, the guy who conceived the World Wide Web, recently said, “It’s at a tipping point.” Is he right? Does the web need a reboot?

A: I’ve had the pleasure of talking to Tim Berners-Lee a handful of times. He never favoured the commercialization of the Internet. He’s been saying that from day one. It was always meant to be a decentralized place where people could share information.

But as far as consumers revolting, I’m prepared to call b.s. on that. If you look at Facebook’s Q4 quarterly earnings for 2018, they beat revenue expectations. We’re talking about 1.5 billion people who are using Facebook every single day. That’s in a quarter where it had the most controversy, the worst news. And on top of that, you have 3 billion people who are using Instagram, WhatsApp or Messenger, all owned by Facebook. That’s almost half the global population.

In the face of all this negative stuff—privacy concerns, safety issues, scandals, third-party data breaches, fake news, bogus accounts, public outrage—Facebook is doing better than ever.

I think consumers say one thing and do another. Or maybe the only people who are really raising these issues are media pundits and journalists.

Look, I’m not being a Facebook apologist. We’ve seen digital platforms fall out of favour with people and disappear very quickly. That’s not the case here. I think the fair question is what type of digital economy do we want?

Q: Platforms like Facebook and Amazon are in full command of their audiences and what they see. Is that going to drive brands toward creating their own platforms?

A: Some brands will build direct relationships with their consumers, while others will create partnerships or just rely on third parties to help. What I think brands should be saying is, “We just want to make your experience as customized and as personal as possible with your permission, and with your full knowledge of the data we have.” Relationships are built on trust. And data and trust now go hand in hand.
Smart voice and marketing

Q: Speaking of privacy, I read that more than half of households are going to have a smart speaker by 2022. What are the implications for marketers of this shift to a conversational interface through smart speakers and devices?

A: If there’s one thing I’m extremely passionate about right now, it’s the smart voice space. I think that voice is the intuitive and natural user experience everybody wants.

Of course, with it comes challenges. There’s the technological challenge of how accessible it truly is for consumers and how easy it is to operate and use and we’ve seen challenges with that. Discoverability is a massive challenge. There is no Yahoo yet for it. There is no real Google for it yet. It’s really in the pre-hyperlink stage. You have to know exactly where you’re going to get there. But all of those are hurdles that are going to be overcome. The adoption figures are pretty staggering. You have something like 30% of people who have smart speakers already purchasing through them!

The bigger challenge I think is that unlike the web, which is free and open, this channel is all owned. Amazon owns Alexa. Microsoft owns Cortana. Google owns Assistant. Apple owns Siri. With that comes a lot of people who are scared that these devices are listening. It goes back to the privacy problem and challenge. But I think we’ll get over that.

Q: The layoffs earlier this year at BuzzFeed provoked some debate about the future of digital publishing and where that’s going. The whole industry is still wrestling with what the right business model is. Do you see the “free and now” part disappearing?

A: It’s very, very clear that subscription models are super attractive. Look no further than Netflix and Spotify. It used to be you subscribed to a physical newspaper that got delivered every day. But today for a nominal monthly fee you can have on-demand access to entire library of content. And that’s a very different model for publishers than the traditional one where the newspaper or magazine showed up on your doorstep or in your mailbox.

I do think we’re at a turning point where people are willing to pay for access. Look at people subscribing to Joe Rogan. Gamers are supporting Twitch. People are subscribing to Peloton. They’re subscribing to Dollar Shave Club. So, we’re finally seeing a maturation of these business models. The future has become a little clearer.

Stephen Shaw is the chief strategy officer of Kenna, a marketing solutions provider specializing in delivering more unified customer experiences. He is also the host of a monthly podcast called Customer First Thinking. Stephen can be reached via email at sshaw@kenna.ca.