TORONTO, ON–With the holidays just around the corner, Purolator announced plans to step-change its network capacity, speed and consumer convenience in anticipation of its busiest week of the year, Black Friday and the week of Cyber Monday, and to prepare for future growth. 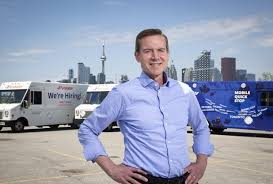 “We are making generational investments today to revolutionize the customer experience of tomorrow,” said Ferguson. “These investments are a direct reflection of our commitment to support businesses and consumers through dynamic market changes and meet their evolving expectations in a hyper-connected world. Our growth plan will position Purolator extremely well to meet historic volume levels and support even more businesses shipping to, from and within Canada over the long term.”

“Purolator is Canada’s leading transportation company and I’m so pleased they are investing and expanding in Toronto, where their roots began almost 60 years ago. These investments will create and sustain jobs, growth and innovation that will fuel the future competitiveness of our city. Their network expansion plans will make it easier for businesses and consumers to connect in an e-commerce driven world and provide even more speed, convenience and sustainability for people shipping goods to, from and within Toronto,” said Mayor John Tory.

The announcement is part of the company’s $1B Delivering the Future growth and innovation plan, which includes investments in network and fleet expansion, job creation and an unprecedented increase in consumer access points:

Network and capacity expansion: The first phase of Purolator’s network expansion adds five new facilities across Canada, including a state-of-the-art terminal in North York, Ont. (Toronto). This terminal is a complement to its national super hub, which Purolator announced in June 2019 and is planned to open in 2021. The company is expected to announce additional phases of its network expansion in 2020.

Job creation and training: Purolator is hiring more than 1,000 new employees this peak season and opening across the country 16 Centres of Excellence, which are state-of-the-art employee training centres focused on safety.

Fleet upgrades: The company’s fleet, already the largest and greenest in Canada among express courier companies, will increase by 300 new vehicles.

Fast facts:
Purolator expects to process more than five million pieces the week of Cyber Monday and over 35 million parcels leading up to the holiday season.

Last year, shipments to Ontario represented approximately 38 per cent of Purolator’s Canadian business volume – with almost half (46 per cent) delivered to the GTA.

Purolator processed more than a quarter billion packages in 2018 and is forecasted to deliver even more this year.

The company is extending its regular delivery operations during evenings and weekends in November and December to meet demand.

In the GTA alone, the company has 4,000 employees, 1,400 vehicles and 13 terminals.
For more information on Purolator’s investment plans, please view the company’s Delivering the Future investment page.

About Purolator
Purolator Inc. is Canada’s leading integrated freight, package and logistics solutions provider. Celebrating almost 60 years of delivering its customers’ promises, Purolator continues to expand its reach and renowned service levels and reliability to more people, more businesses and more places across the country and around the world. Purolator is proud of its Canadian heritage and is focused on sustainably positioning itself for future growth and success. Purolator is also committed to contributing to the well-being of the communities it serves and where more than 12,000 of its employees live, work and play.